Birmingham - a city on the move 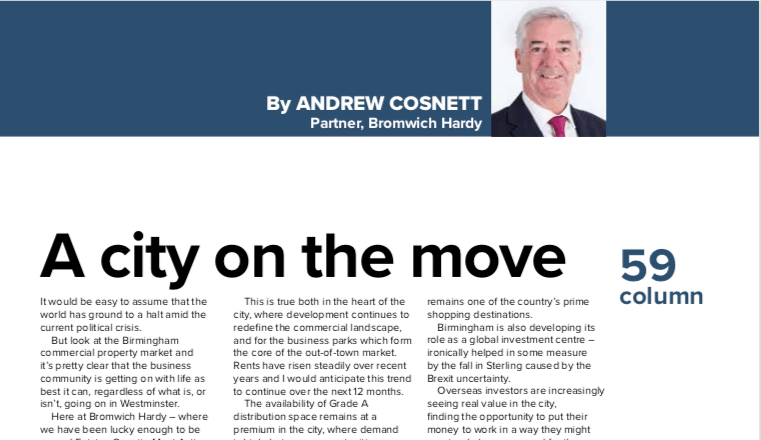 It would be easy to assume that the world has ground to a halt amid the current political crisis.

But look at the Birmingham Commercial Property market and it’s pretty clear that the business community is getting on with life as best it can, regardless of what is, or isn’t, going on in Westminster.

Here at Bromwich Hardy – where we have been lucky enough to be named Estates Gazette Most Active Agent for Warwickshire for a sixth year running – we have seen sustained demand for industrial, manufacturing, logistics and office space across both the city and the wider conurbation.

Much of my time is spent with clients in Birmingham. Day in, day out I see at first hand the evidence that the city is on the move and few signs in the commercial arena of the paralysis that Brexit has brought to political life.

Of course, some investment decisions are being held back until we have a clearer picture of just what Brexit will bring. But that does not mean that there is not plenty of business being done, and opportunities to grasp, within the commercial property sector.

I’ve also been fortunate to be named EG dealmaker of the year in Warwickshire this year, and part of my success has been in seeing and grasping the opportunities that the current market presents rather than being stymied by the challenges.

Overall, the market remains robust. We have seen a healthy rise in the volume of office take-up over the last 12 months and expect this to continue for the foreseeable future, fuelled by the quantity of speculative development likely to become available.

Positive rental growth is also likely to continue, with little sign of the sustained demand we have seen for a number of years tailing off.

There is clear interest from major parties in much of the speculative development already under way meaning the market is unlikely to fall because of an oversupply of quality stock.

This is true both in the heart of the city, where development continues to redefine the commercial landscape, and for the business parks which form the core of the out-of-town market. Rents have risen steadily over recent years and I would anticipate this trend to continue over the next 12 months.

The availability of Grade A distribution space remains at a premium in the city, where demand is high, but some opportunities are coming on stream in the wider market to help ease the pressure. It has certainly become apparent over the past year that more companies are prepared to invest off-plan in logistics space to ensure they get the facilities they need rather than wait for suitable existing stock to become available.

The retail sector also remains relatively buoyant in the heart of the city, despite the stress on the market nationally caused by the growth of online commerce. Developments such as the 160,000 sq ft flagship Primark store do much to project a positive image of the city, which remains one of the country’s prime shopping destinations.

Birmingham is also developing its role as a global investment centre – ironically helped in some measure by the fall in Sterling caused by the Brexit uncertainty.

Overseas investors are increasingly seeing real value in the city, finding the opportunity to put their money to work in a way they might previously have reserved for the traditionally-popular London market. Some commentators now expect the Birmingham market to grow by double digits over the next three years, aided to some degree by its exposure on the international stage when it hosts the Commonwealth Games.

So, the evidence gives grounds for cautious optimism as we move forward. Of course, we are all subject to the headwinds of political uncertainty, but there is no doubt in my mind that Birmingham means business whatever the next 12 months brings.