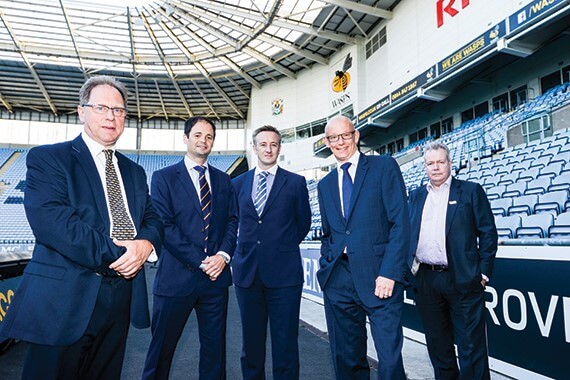 Coventry needs to be confident about its growth potential and stop looking over its shoulder at Birmingham, according to the expert panel at EG’s first ever Coventry City Talks event.

A robust discussion took place at Coventry’s Ricoh Arena around the topics of devolution, development and investment in the city, with James Brookes, associate partner at Bromwich Hardy, setting the tone within the first five minutes of the debate. Brookes immediately asked Martin Reeves – chief executive of the fledgling West Midlands Combined Authority, which was formed in June, and Coventry City Council chief executive – if devolution will actually help the city.

He said: “Will Coventry still struggle and play second fiddle to Birmingham? Coventry has been chasing the development curve for as long as I can remember. How will devolution help?”

Reeves was taken aback by the direct questioning, but responded: “There are clearly some challenges – there’s massive development taking place in and around Birmingham with HS2, and Coventry is trying to develop its city centre around Friargate, the railway station and City Centre South, all in a challenging market with investment fragility. That is a problem. Are there some issues out there about perception? I think it’s more of a reflection of Coventry being confident about its growth potential while not looking over its shoulder at Birmingham.”

He added: “For economic growth, we need to get over the Birmingham issue and say far from it being a liability and a challenge, we’re less than half an hour from the second city and an hour from our only global city – what’s not to love?”

With each area of the Midlands having its own fundamental differences and issues, an understanding of how devolution can work at scale is needed to make it work. Reeves said that the West Midlands Combined Authority has worked on a model of economic growth and impact that has “never been produced before”.

“This gives us a sense economically of the impact not just on GVA but also economic uplift across the entire area. We’re going in with our eyes wide open to argue the case about not having a disproportionate amount of funding going into either place X or Y.”

But just how much traction does the Midlands Engine brand have?

As the Midlands is geographically at the centre of the UK, Reeves believed it to be pivotal in balancing out the economy between London and the North.

“The moniker is an artificial construct and a government minister-led sense of balance against the Northern Powerhouse. Scale is important.”

Reeves believed the most important issue for Coventry and Warwickshire is “making sense of our own identity and our own proposition for growth”.

“Layer that into the West Midlands and then into the Midlands Engine, which is critical to the emerging new government’s industrial strategy. If we can get it right through a major swathe of the UK, we can rebalance the heat of the economy between London and the South East with what I believe to be an overinflated view of the Northern Powerhouse.”

Panellists and guests were keen to make the most of their opportunity to question Reeves on various subjects, including Brexit. He said that Brexit has created uncertainty and some turbulence in the investment sector and said there was a “pause” in the market. Reeves believed, however, that it also created opportunities, with new investment and new types of private equity and sovereign funding, including pension funds wanting to come into Coventry, Warwickshire and the wider West Midlands area.

However, Reeves warned that Coventry and Warwickshire needed to be ready with “proper, investable opportunities”, and added: “Unless we’re ready and are aware of the risks and returns, then we’re stuffed. We’re learning to be more agile. Working at scale with Birmingham, the Black Country and other areas across the Midlands is more important post-Brexit than ever.”

Bromwich Hardy’s Brookes added: “As a result of Brexit, I think we’ll see more investment from overseas into the UK because of the exchange rate.”

“Coventry has a desperate shortage of student accommodation. For the two universities to effectively compete with other cities for students, it needs quality accommodation. There are currently 50,000 students here and only 4,000 purpose-built beds. There are schemes coming through but there’s still a massive undersupply. Around 25,000 students won’t be able to access purpose-built space.”

Nick Button, head of commercial property at law firm Band Hatton Button, agreed with Bellfield that there needs to be better provision of purpose-built student housing in the city. “There’s a lot of second-rate existing stock which will hopefully be regenerated back into family housing too,” he said.

The obvious next area of investment in Coventry is retail and leisure, and a long-awaited announcement on a preferred development partner for the council is expected soon. Reeves confirmed the local authority is in a procurement process to secure a partner but could not go into detail.

“There’s a lot going on. A city centre should be a mix of residential, retail and leisure, employment and digital meeting with a café culture, which is not easy to deliver. The original Jerde city centre master plan eight years ago was unrealistic and I said so at the time. This is our one chance to get it right.”

Reeves confirmed that via the WMCA, there is a process with opportunity to leverage up to £150m as part of a city deal to accelerate development across Friargate and the city centre, which could include further spec development of offices and a hotel.